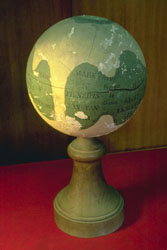 "A small globe on a wooden pedestal illustrating the spots of Venus according to the observations of Francesco Bianchini carried out in Rome", reads Ceschi’s 1843 inventory.
Bianchini lived in Rome in the service of cardinal Ottoboni (later Pope Alexander VIII), superintendent of the fine arts and also secretary of the Congregazione del Calendario, on which question he wrote Solutio problematis paschalis...(1703 Rome, Apost. Press) and De Kalendario... (1703 Rome, de’ Conti). He drew a meridian in the Roman church of Santa Maria degli Angeli and described it in two memoirs contained in a posthumous edition in the volume Opuscola varia... (1754 Rome, Barbiallini).
The Archives of the Department of Astronomy in Bologna preserves some of his letters to Manfredi on the subject of the calendar.
In his 1728 volume Hesperi et Phosphori nova Phaenomena sive observationes circa planetam Veneris he provides instructions for building the Venus globe. The surface of the planet, reproduced in this book, is as it appeared to him in the observations he made using the 100 palm (21 metre) telescope built him by Giuseppe Campani (1636-1715).
The cartouche, positioned in the sea Primum seu Regium Johannis V (John V of Portugal, to whom the book is dedicated) carries the words:

The King of Portugal presented Bianchini with a Newtonian telescope by Samuel Molyneux, with metal mirrors, focal length two feet and silver finishings, received from the Prince of Wales. Bianchini left it to Cardinal Davia who, in turn, donated it to the Institute of Science (see file 35 for details on this telescope, now lost, and the correspondence between Bianchini and Manfredi).
The globe was restored in 1995 by N Scianna (Forlì).